Do You Really NEED a Logo?

Your logo is not your “brand”. Your “Brand” is the sum of all of your parts. It’s the logo. It’s your website. It’s your mission and your vision and the values that you espouse. Your brand is the experience customers have when interacting with your team. Your logo should reflect that.

One of our tools in the great Rocket Pop Marketing Toolkit is logo design. Often, we’re called on to update a design. Sometimes, we’re asked to create something new to reflect a change in direction for an existing company. We really hit our stride when designing a logo for a brand new or startup company.

Before we dive into the science of creating a good logo, let’s clear up a common misconception:

Your logo is not your “brand”.

Your logo is part of your brand. Your “Brand” is the sum of all of your parts. It’s the logo. It’s your website. It’s your mission and your vision and the values that you espouse. Your brand is the experience customers have when interacting with your team.

Your “Brand” (capital B) is how people feel about you.

But back to logos.

Amazon is a great example of a successful logo.

Amazon is considered the world’s most valuable brand. Much like the story of Apple Computers, Amazon was created in a garage in Bellevue, Washington in 1994 by Jeff Bezos. While he initially built it as an online bookstore, he quickly began adding products, and today one can purchase just about anything through the Amazon website. The mission is to provide a wide array of products quickly.

The logo reflects that. The bold, yellow arrow beneath the name of the company stretches from the letter “A” to the letter “Z” – “products and services from A to Z” – while also implying a speed of service (much like the hidden arrow in the FedEx logo).

Apple is another great example. 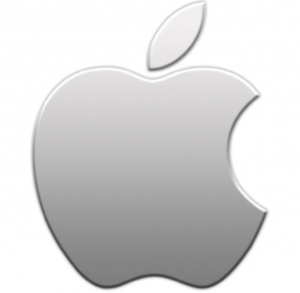 Steve Jobs was famous for introducing new products with the explanatory phrase, “It just works.” When you first booted up a new Macintosh or iPod or MacBook, a single push of a button would open up a world of intuitive discovery. When Apple first introduced their text app for phones, the AI in the operating system would use “predictive text,” anticipating what you were trying to communicate and giving you the option of letting the phone finish the word for you. Jobs told skeptics, “Trust the keyboard”.

As much money as Apple puts into designing their products, they spend an absurd amount of money designing their packaging. Opening a new Apple device is supposed to provide an intuitive, tactile experience. Research into retail habits shows that consumers spend but a few seconds looking at a box before deciding to pick it up. So an Apple box follows the same rules as the device it contains: It just works.

Their logo (once a faux woodcut image of Sir Isaac Newton sitting under a tree) is now a sleek, minimalist, metallic rendering of an apple. There are no hidden secrets. It just works.

When you look at the logos for companies like Apple, or Nike, or BMW, it takes but a quick glance for the viewer to know “That’s Apple Computer” or “That’s Nike sneakers” or “That’s BMW cars”. This speaks to the need for a logo to be iconic, and speak to the “brand” of the company with a simple image. 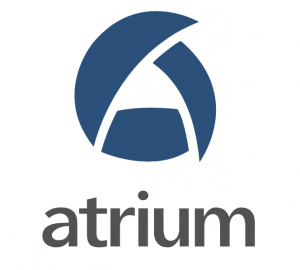 We used these principles to create an iconic logo for our client Atrium.

When we met the team behind Atrium, they had spent years working in the campus financial market. They knew that they had a great idea for a campus card system, but didn’t know what to call it.

(We’ll get into naming conventions in a later post.)

At the time, campus card systems were dominated by 3 or 4 huge international players. If you wanted a student ID to unlock doors, they could do that – but they would control what sort of door lock you could use. They could set up a student ID to make purchases in the bookstore – but you would need to buy their proprietary point-of-sale system. In fact, in order for their system to work at all on your campus, you would need to purchase one of their on-site systems of data servers, and those servers would cost tens of thousands of dollars and require expensive upgrades on a regular basis.

What Atrium designed was a campus card system that combined your student ID with your debit or credit account, your dorm room key, and more, allowing you to use that ID to access any goods or services available at your school – from the cafeteria to the laundry to the pizza joint across the street. Instead of on-campus servers, it uses a cloud-based system, ensuring availability and lowering costs. It’s also set up to interact with a wide array of hardware systems, allowing schools to choose which devices and machines worked best for them.

We boiled down hundreds of pages of technical specs to three simple sentences:

“Atrium is a revolutionary campus card management solution for institutions of any size. It provides the functionality of traditional systems… re-imagined for the future. Easy and powerful for administrators to use, Atrium is backed by personalized support and a 100% availability guarantee from a trusted name in the industry.”

The word “atrium” has a few definitions. One is “an open courtyard in a building or home”. Another is as a chamber of the heart that allows blood to flow from one side to another. “Atrium” as a campus card system embodies both of those. It’s the central repository for your campus ID and service needs, and it allows student data to flow from one side of your institution to the other.

In the logo that we designed, the bold blue color signifies security and professionalism (which is why you often see it used for legal or financial services). The heft of the stylized “A” symbolizes the strength and stability of the system. The three openings in the graphic imply the open flow of data from student to device to administrator.

As Atrium achieved success and was installed on more campuses, the stylized “A” on a polo shirt told administrators and campus decision makers that their trusted partner was on the scene.

Give us a call and we’ll make certain that it does.