Cheap Images are a Bad Idea

“Can’t I just buy some stock photography?” Sure, you could. But your customers and clients are smart. Quality counts, professional images sell, and your customers know the difference.

Before I joined the team here at Rocket Pop I spent almost 40 years in the restaurant business. While I know that this makes me very old, it also provided me with a wealth of worthwhile and relevant experiences that come in handy in my current role.

At one point, I lived in Ossining, New York. This is the home of Sing Sing Prison.

Fun Fact: They used to keep a prison barge in the Hudson River just off of Manhattan, and when it was full of criminals, they would tow it upstream to Sing Sing. This is where the term “getting sent up the river” comes from.

But Ossining was a lovely town. I worked, however, about an hour away in Orange County. This was considered “Upstate” and was very close to the United States Military Academy at West Point. My commute made it worth it. I could leave my home, jump on 9A, and head north. I would pass Croton-on-Hudson, Van Cortlandt Manor, Oscawana, and Crugers on my way to the Bear Mountain Bridge, which crossed the Hudson River.

Several times a year, however, I would have to detour through Woodybrook or Verplank because the road was closed.

9A, you see, is very popular with advertising agencies. While most New Yorkers consider anything north of Yonkers “Upstate,” my home in Ossining was a 25-minute train ride to Grand Central Station. Many of those working on Madison Avenue had homes in my neighborhood, and knew that 9A was a beautiful stretch of road.

When you look at an automobile ad or commercial, and the driver is motoring down a parkway, a smile on his face and the wind in his hair as the sunlight filters through the trees and water sparkles in the background, there’s a really good chance that it was filmed on 9A in Westchester County along the banks of the Hudson. 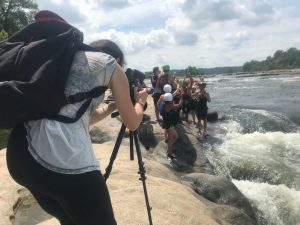 At another point, I was waiting tables at a large, nationwide chain restaurant that was… Let’s just say that they’re famous for their desserts.

At the end of the meal, I would begin my dessert pitch, because when you’re waiting tables, the check average is everything.

Let’s say that there were four people. I would hand out three menus, opened to the dessert page, and hold the fourth in my hand as if I were reading a story aloud. The person directly to my right would be my victim, forced to look at my menu and those of their dining partners. I would briefly describe two of the desserts, and then pause, waiting to make my kill. Leaning over the table, I would quietly tap the menu of the person the farthest to my left, and conspiratorially whisper, “This one, however, is my favorite.” Everyone would lean over to look at a beautiful picture of a delicious slice of raspberry cheesecake.

I sold desserts like I was peddling toilet paper during a pandemic, and that picture closed a lot of dessert sales for me.

Many of our clients come to us satisfied that they have a pretty good assortment of good images, but you really need a pro. Those pictures represent your company, and they celebrate your product. If they’re cheap, then so is the value of your image as an organization. 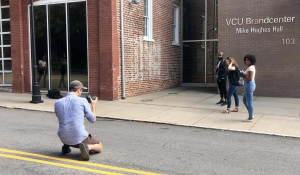 Almost everyone today has a smartphone, and those little devices now have amazing cameras. But they don’t allow the tweaks of focus and depth of field that a professional photographer using pro equipment can achieve. They don’t come with professional lighting, or include a lavalier microphone for high-quality audio. They don’t spend hours in front of a computer going over every pixel to make certain that the images your customers will see are absolutely perfect.

Sure, you could. But your customers and clients are smart, and they can spot a fake a mile away. They want to see real people making real products and providing real services.

Our clients are nonprofits, brick & mortar shops, lawyers, educators, and, yes, restauranteurs. It doesn’t matter if you need photos of your corporate leadership team or a bunch of kids in kayaks. It can be delicious food or compacted scrap metal.