That Which We Call a Rose…

Your choice, but a good name is everything when establishing a solid brand.

That Which We Call a Rose…

What’s in a name?

We’ve long worked with a client that offers a unique cloud-based campus ID system. It provides your student ID, access to coursework, and also functions as your dorm key, washing machine token, off-campus pizza discount card, and more. It’s everything that your actual ID and debit card is, but combined into one product with a simple, cloud-based administrator.

We were introduced to this client when they were very early in development, and the idea for their product was basically some words and bullets on a cocktail napkin. “What if we could make this?” As they began the process of writing the codes and mating the campus hardware to the eventual product, we began imagining what an administrator or user interface would look like, how it would work, and, of course, a name for the product.

We started by researching every competitor and education service provider. This gave us a solid list of similar sounding names to avoid. We then began filling a whiteboard with proposed names. One side was filled with nonsense and coined names. Think “Yelp” or “Google”. The other side was filled with names that we felt may convey what the product did. Each day, we would spend a few minutes staring at the whiteboard, perhaps add a new name or word, and erase a few that didn’t touch us.

Once we felt as if we had a winner, the real work began. How would we use it design-wise? How would we create a recognizable logo? Most importantly, was it available?

Off we went to dive deep into Google and GoDaddy.

What we came up with was “Atrium”.

An “atrium” is an open area in the middle of a larger structure. This conveyed the open architecture of the cloud system. An “atrium” is also a chamber of the heart, allowing blood to flow into the ventricles. This symbolized the free flow of information and data between the user and the administrator.

The logo was a stylized “A” which would become ubiquitous, like the Nike swoosh or the Apple logo. And “atriumcampus.com” was available as a domain for just a few dollars.

We went through a similar process more recently for SNP Properties.

SNP’s first major acquisition was at 17 West Broad Street in the heart of Downtown Richmond. At the time of purchase, it was simply “West Broad Street Apartments”. SNP immediately began a program of renovations and upgrades, and we were challenged to brand the property as something more upscale.

The first thing that we discovered about 17 West Broad is that the building is really unique. It’s over 100 years old, and many of the apartments hold vestiges of a past use. There are over 70 different floorplans, with different windows, lofts, exposed walls, and more. The location also came into play, as the surrounding neighborhood is full of boutiques and restaurants. A recurring neighborhood event is “First Fridays” which invites people to grab a glass of wine and walk between the many galleries that dot the Arts District.

A few doors down is “00 Broad Street”. 17 West Broad is where West Broad meets East Broad Street. Businesses are described as being “North of Broad” or “South of Broad”. So, SNP’s new property is where East meets West and North meets South.

We wanted to take advantage of the unique features of 17 West Broad and play into both its central location and location in Richmond’s Arts District.

After the same exercises in word clouds and domain searches, we landed upon “The Mezzo”.

“Mezzo” is an Italian word, derived from the Latin ‘medius’. In music, it’s the voice between a soprano and contralto. In modern Italian, it is used to denote the “middle” of something.

“The Mezzo Lofts at City Center” ties in the arts community, the interesting architecture of the building, and the property’s central location in Richmond. 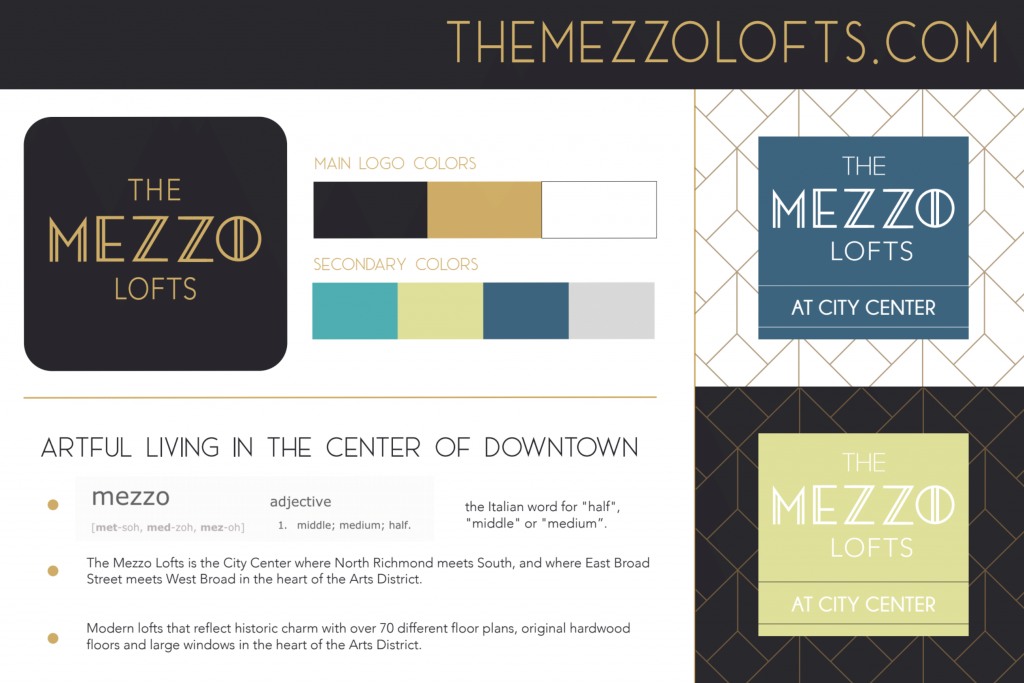 It’s easy enough to simply call a business what it is – “Bob’s Widgets”. Or to tie in a location, like “Richmond Widgets”. A creative mind might come up with something unusual, like “Yubik”.

Your choice, but a good name is everything when establishing a solid brand.